The College is in the centre of Oxford in Broad Street. It is easily accessible by car, train and coach. You can find us on Google Maps here.

If approaching Oxford from the north: (recommended route) head from the ring road down Banbury Road (A4165) and through the Summertown shopping area. At the second set of traffic lights (a mile after Summertown), turn left onto Parks Road and continue to the traffic lights at the crossroads with Broad St/Holywell St (with the King’s Arms on your left). Turn right into Broad Street and Trinity is found halfway along the road on the right, behind the blue gates.

If approaching from the west: continue past the railway station, turning left at the traffic lights into Worcester Street and then right into Beaumont Street at the next set of lights (next to Worcester College). At the end of Beaumont Street, turn left into St Giles, take the right-hand lane into Banbury Road and at the traffic lights turn right to into Parks Road (follow the directions above).

From the east: (A420 and Cowley and Iffley Roads) after crossing Magdalen bridge follow the main traffic route right into Longwall Street and then into South Parks Road. At the traffic lights turn left into Parks Road  (follow the directions above).

From the south: follow signs for the station, then follow the route as if approaching from the west.

Park and Ride: Parking in the centre of Oxford is limited and can be expensive; it may be easier and cheaper to use the Park & Ride.

Oxford station is on the Cross Country and West Coast lines, and is well served by Virgin, Cross Country, and First Great Western. To get to Trinity from the station, turn left out of the station forecourt, past the Said Business School and walk straight ahead along Hythe Bridge Street, George Street and onto Broad Street; Trinity is on the left opposite Turl Street.

Oxford Coach Station is situated close to Trinity, in Gloucester Green, off George Street; 5 minutes walk from Trinity. The Tube and X90 services to London and the Airline services to Heathrow and Gatwick also stop in the High Street, outside Queen’s College.

The college is split into four main quadrangles, and expansive areas of garden. Front Quad, nearest the entrance, is home to the Porter’s Lodge, the President’s Lodgings on the far side, and staircases 1 and 5-7. Library Quad to the right is home to the library and staircases 2-4. Durham or Chapel Quad is beyond Front Quad, after passing through Chapel Arch, and contains the Chapel, the Dining Hall and staircase 11 on the left, and staircases 8-10 (Old Library, offices and the Bursary) on the right. The final quad beyond this one is Garden Quad, containing staircases 12-17 – staircase 18 is even further back, in Dolphin Yard. The gardens are to the right of Garden Quad and to the north of Library Quad. 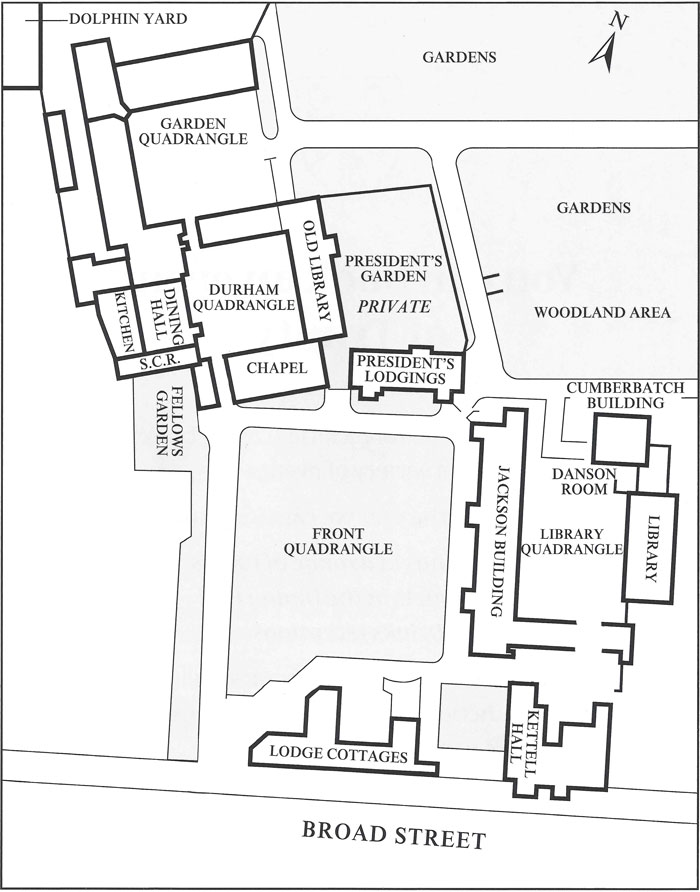