We hope you will enjoy following the progress of our Levine Building as it moves towards completion; please also have a look at the image galleries for some more visuals showing how our site is being transformed. 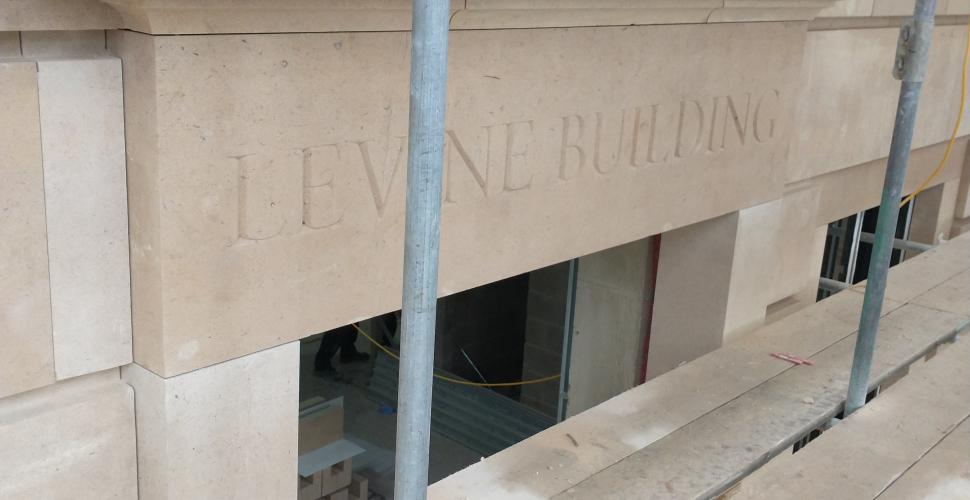 As the academic year draws to a close work on the Levine Building continues apace and what was once the shell of a building begins an astonishing transformation.

Plaster and paint work, together with light fittings, give larger spaces, such as the auditorium and café/informal study space, a much more finished appearance. Work on the bedrooms is also well advanced with the installation of en suite bathrooms and large built-in cupboards, offering plenty of storage space. Outside, scaffolding is removed from sections of the building, revealing the beautiful Bath stone facing.

Despite there being some way to go, there is now a real sense of the building coming together and that the project is on the home stretch. 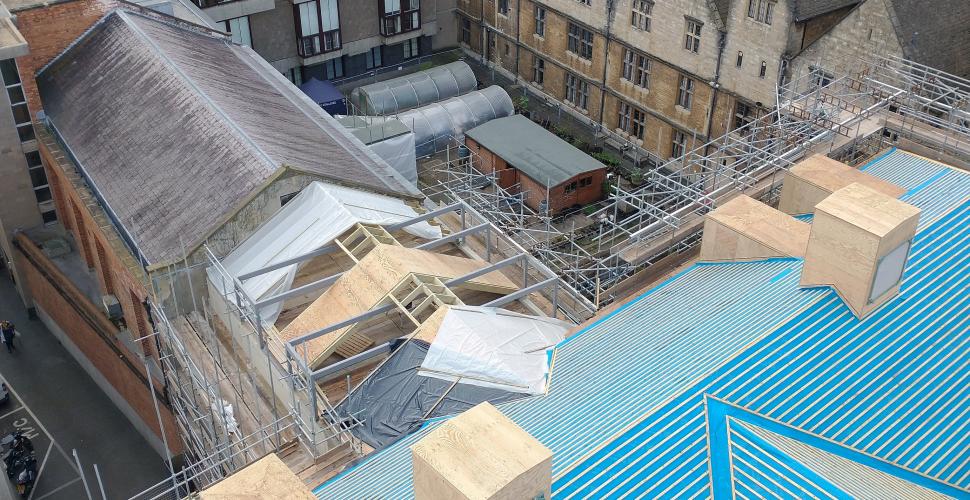 With the concrete structure now standing at full height, work could begin on the installation of the roof, windows and stone facing.   The inside of the building also began to take shape with the construction of internal walls, screeding of the floors and first fix mechanical and electrical work.  The beginning of April marked another major milestone for the project, when the Levine Building was connected to mains electric.

Topping Out the Levine Building 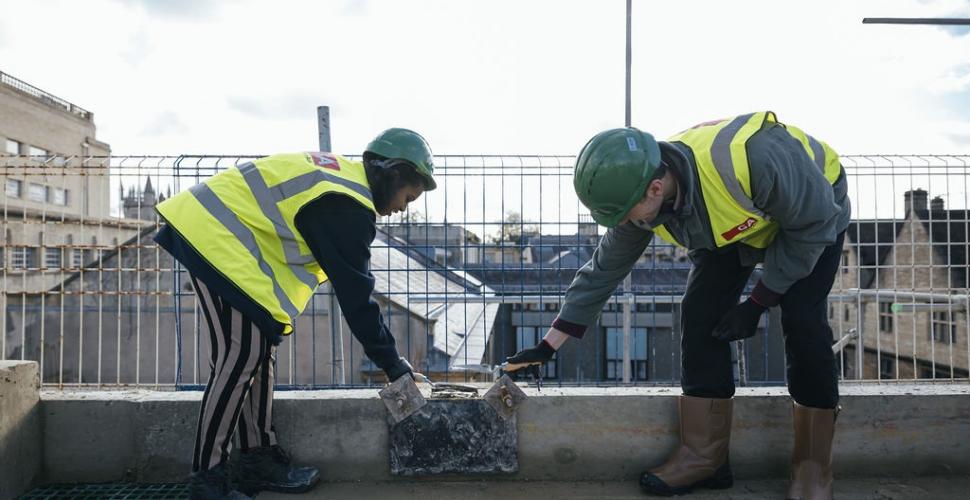 With the building’s concrete frame reaching its full height, the college was able to mark the ‘topping out’ of the Levine Building in a small but important ceremony. The event was attended by the College President, the Estate & Domestic Bursars, the Director of Development, the architect Hugh Petter and other members of the building’s design team. Most importantly of all, we were joined by two student representatives, JCR President Nadia Hassan and MCR President Joseph Hickie, who were given the honour of trowelling by hand the final parts of the building’s structure.

Participants at the event conducted a tour of the site and observed social distancing throughout. Those attending were able to see the Auditorium and Function Room for the first time, which are now truly impressive spaces. The President gave a short rooftop speech against the backdrop of the Bodleian Weston library, Radcliffe Camera, Sheldonian Theatre and Exeter College behind.  A reminder that the Levine Building had begun to take its place amongst the spires. A special thank you goes to Nadia and Joe for attending the event and completing the final part of the work so adeptly. 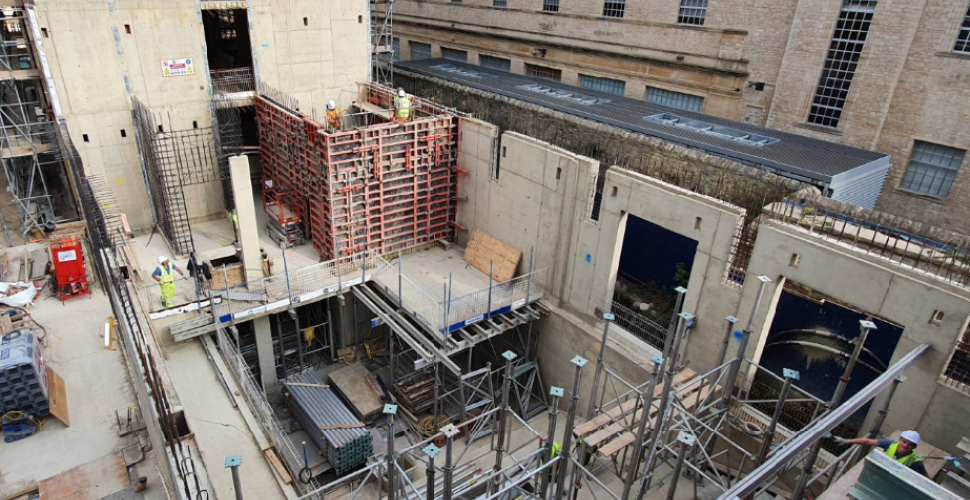 With the crane in place, work was able to progress at a much faster pace than before, and the building’s concrete frame started to take shape throughout the summer. The Eastern end of the site, which did not have a basement to be built, was the first to start rising above the ground. This section will house teaching rooms on the ground floor and soon, after just a few weeks work, it was a full three storeys high, with the top two of those reserved for student’s rooms.

It was during this phase that the time-lapse camera looking over the site really started to come into its own. Looking through our image gallery shows the rate that the concrete structure for much of the building was erected during the summer months.

By August, the Western end of the building also started to climb, and subsequently a new part of Library Quad started to appear. The ground floor level of this wing of the building is to become the community space & café.  Sitting on the floor above that, the new administration office for college staff. By the beginning of Michaelmas term, the structure of the Auditorium was well progressed and more advanced parts of the Levine building was starting the match the height of the Library. 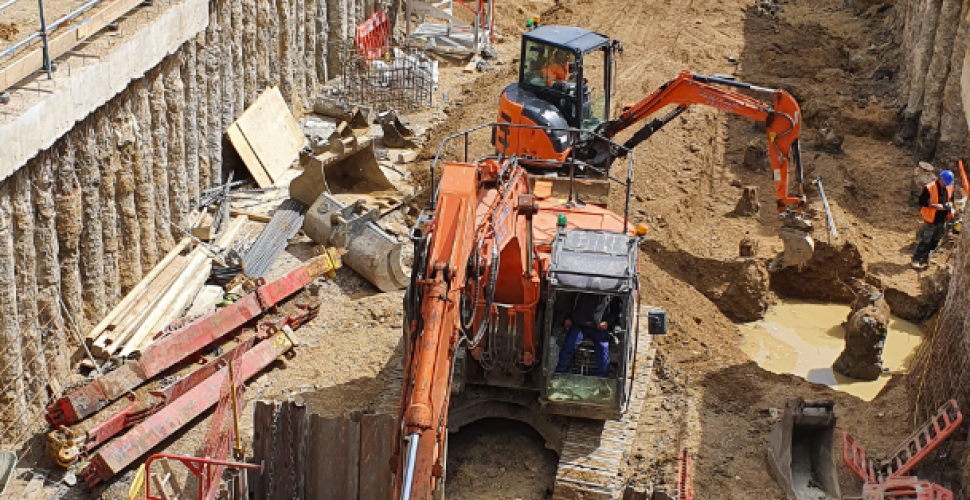 Following the completion of the archaeology on site, the early part of contractor Gilbert Ash’s time on the Levine Building site saw them put much of their effort into the ground. Significantly, the work involved installing the piles that will provide the support for the structure which is to be built above. Once the piles were completed, the basement areas could start to be excavated. The basement itself covers a large footprint and sinks deep into the ground to allow for high ceiling heights and large spaces to run services within.

Unfortunately, in response to the coronavirus epidemic, for a few weeks in the spring the site had to close. As the work was in its earlier days, the numbers working on site were actually quite low, so social distancing was not so much of an issue. Gilbert Ash acted swiftly to put in place new control measures to ensure the safety of those working on site, but difficulties remained for a period in the staff travelling to site and getting deliveries of supplies or equipment.

The delivery of the site’s crane was delayed by a number of weeks due to the restrictions, but eventually the crane arrived and was erected on the site, towering over the college’s existing buildings. 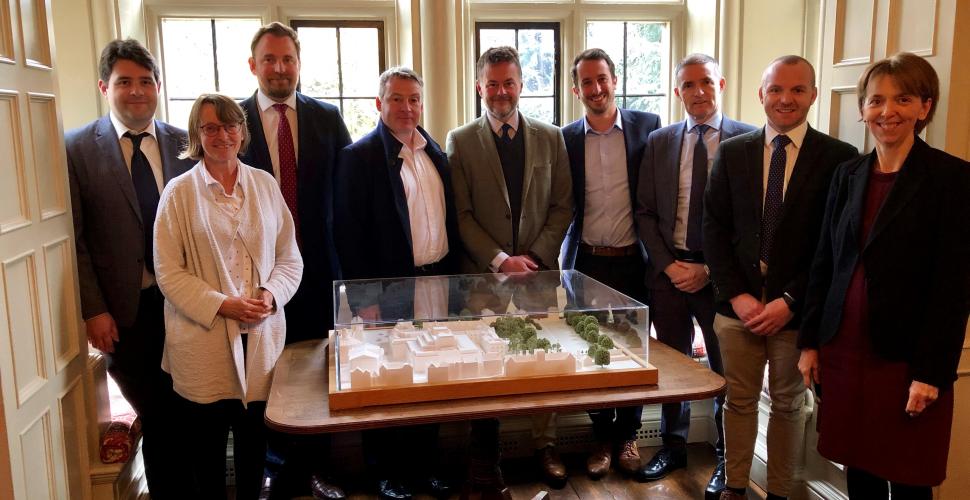 Work on the Levine Building site came to a stop over the holiday period, which provided a moment to look back at this term’s activity on the site. A huge transformation has been in progress: so much has been achieved in just a few months.

In November, the College signed a contract with construction firm Gilbert Ash to deliver the Levine Building itself – they have been responsible for a number of landmark buildings, including the memorial to Bomber Command, which demonstrates their skill in working with stone, and more locally, major projects at Wadham College and St Edward’s School.

The new building in the grounds of Trinity College now has large foundations and a basement; the process of digging these out would destroy archaeological remains, so excavations are being conducted in advance of construction work to see what has been hidden for centuries. 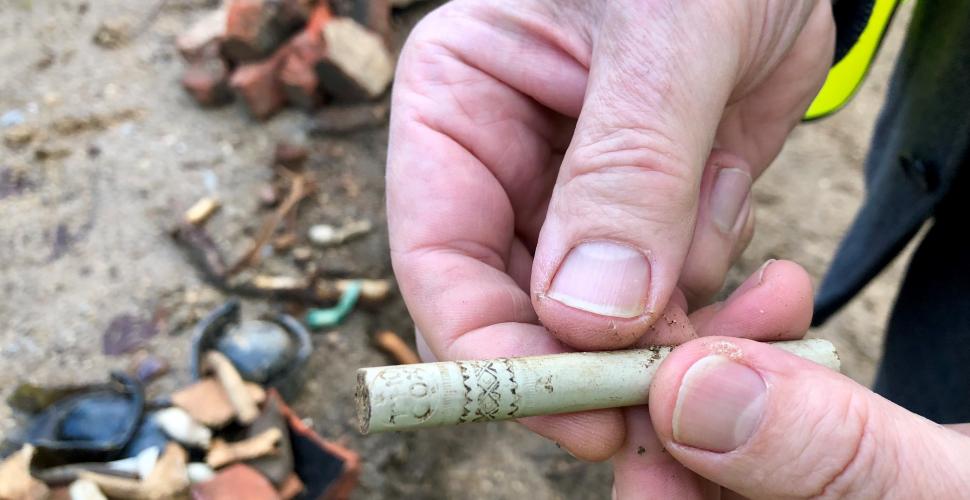 The new building in the grounds of Trinity College now has large foundations and a basement; the process of digging these out would destroy archaeological remains, so excavations are being conducted in advance of construction work to see what has been hidden for centuries. A team from Oxford Archaeology have been involved from the early stages of this project to ensure that important archaeological evidence is thoroughly excavated, recorded and reported on.

An initial assessment looking at the archaeological potential of the site raised the possibility that there could be evidence spanning 5,000 years, from the prehistoric periods, through the Roman occupation, to the Saxon, Medieval periods, as well as the formal 18th century gardens.

The team has discovered evidence for medieval field systems in the form of ditched boundaries extending under the formal lawns. In the wooded area a small medieval key-hole shaped stone-built kiln or oven was near to a series of pits containing 700-year-old broken pottery vessels and food waste, indicating some form of occupation in this area during the 13th century. After the occupation ceased the area seems to have become disused or turn over to agriculture or gardens as a thick deposit of rich soil developed. Expansion of the College buildings probably promoted the next phase of use when some large quarry pits were dug in the late 17th to early 18th century to gain gravel for construction somewhere nearby.

Another exciting find was evidence of a large stone chamber that looks to be the remains of a large fountain or water-feature; the vessel goes down some three metres into the ground and was probably manually powered by pump. This is particularly significant as it appears to confirm the existence of the elaborate formal gardens depicted in William Williams’s 1733 print of the college. The print was previously thought to reflect Williams’ aspirations for the gardens (perhaps an artistic flight of fancy), but the garden discovery appears to match the feature in the print very closely.

Demolition of the Cumberbatch Building 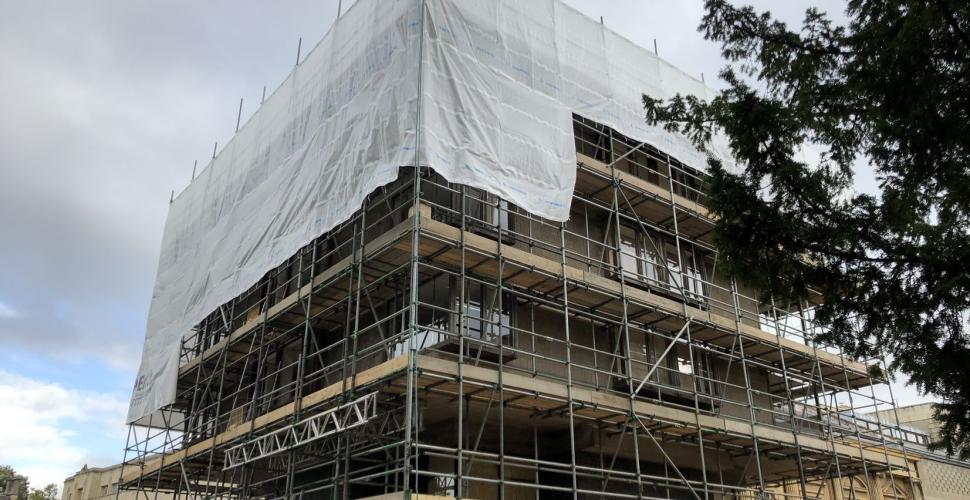 The scaffolding around the Cumberbatch Building was completed on 9 September and this allowed the start of the demolition work for the Levine Building project.

With the roof structure removed, demolition equipment was installed onto the top floor of the Cumberbatch for breaking up the reinforced concrete structure. This was noisy work, involving hammering at the concrete to shake it free of the reinforcement and then cutting and removing the metalwork left behind. It can also be dusty work, so the building was surrounded in debris sheeting and sometimes a water mist is applied to help capture the dust in the air.

Work has also been underway in the Norrington Room of Blackwell’s bookshop next door to the site. The existing fire escape from the Norrington Room is to be moved to a newly formed escape, so that rather than passing through the basement of the Cumberbatch Building, the escape route can go via the lightwell outside the Library. 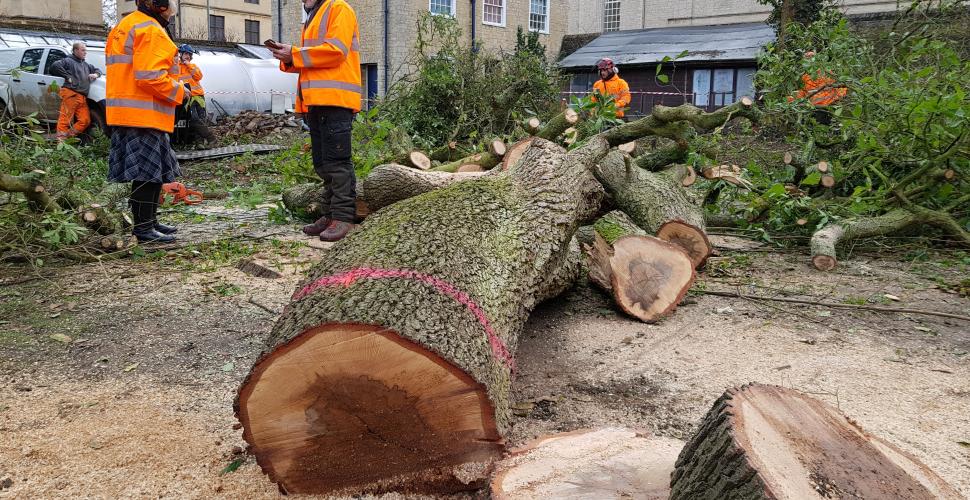 The first significant preparatory works for the Levine Building began with the felling of a number of trees in the Wilderness to enable access and construction. Diseased tree trunks were disposed of using a wood chipper— Europe’s largest wood chipper had to be brought in for this task!  Other wood has been saved and will be used within the college as planks and, it is hoped, even for carvings.

As some of the trees in the Wilderness have come down, others have been going up. A half mile of new hedging, including new trees, has been planted on the college’s Wroxton estate in north Oxfordshire.