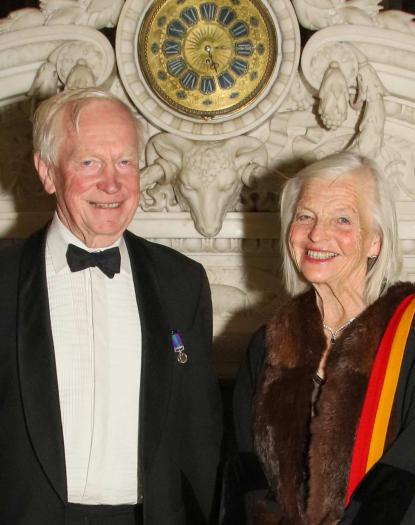 Our family has historic links with Trinity College,  but more recently both our daugthers attended Trinity.
Robert is a local councillor and vice chairman of a charity restoring the former Devizes Assize Court. His non technical interests include forestry and farming.  He graduated with an Engineering degree from Trinity Hall Cambridge after serving with the Blues for National Service. He joined Schlumberger surveying oil wells in the Middle East followed by research  and development in the USA. In 1975 he jointly formed an Anglo-French oil well logging company operating in Iran. He pioneered collaborative research between industry and a university, which was rare at that time. In 1981 he founded Sondex providing innovative Well Logging Instrumentation which grew to become a major supplier worldwide, gaining Queen’s Awards for Enterprise and International Trade . Robert was a regional finalist for the EY Entrepreneur of the year 1999.
Julia has been involved in various fundraising ventures and has recently retired as Chairman of the Fundraising committee of St. John Ambulance, Wiltshire.  She is also a Liveryman and sings in a local choir.